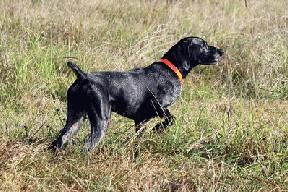 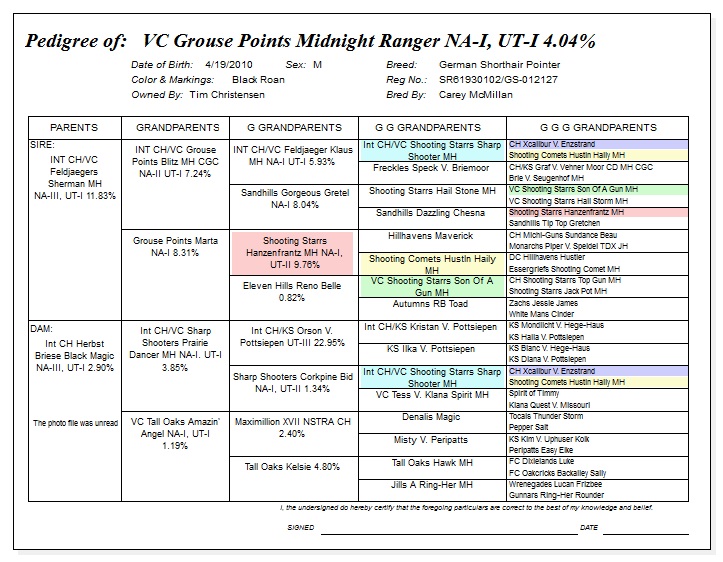 RANGER IS OWNED BY TIM & SANDY CHRISTENSEN OF RIVER FALLS, WISCONSIN. HE IS SIRED BY INT CH/VC FELDJAEGER'S SHERMAN MH AND HIS DAM IS HERBST BRIESE BLACK MAGIC NA-III, UT-I.

In Tim's words: "Ranger, even as a puppy displayed drive and intelligence. We purchased a litter pick after the pups were conceived. In viewing the new puppies Sandy immediately referred to him as Handsome Dude. He continued to display all these characteristics as he grew and went through training. I am new to NAVHDA and this is the first dog I have tested. We NA tested and Ranger's potential jumped out. He earned a 112pt prize I. I proceeded to hunt him on Grouse and Pheasants in Wisconsin and South Dakota. He was holding point, backing, tracking and retrieving at 5-6 months. The fall of 2012 we went to North Dakota duck hunting, he was steady in the blind and retrieved 35 ducks and 2 geese in 5 days of hunting. In 2013 I joined other NAVHDA members who helped me prepare for an August Utility test. Ranger finished with 204 pt. prize I. A comment from a judge that really stuck with me I quote, "I really like your dog", which I took as encouragement until another party came to me and said, no they REALLY like your dog. I have registered Ranger for this falls NAVHDA Invitational in Iowa. In 2013 he sired a litter, we kept pick of the males and found all of Rangers positive traits followed through. I registered Ryder for June 2014 NA and now that I have a little bit of experience I may be ready for UT testing in August. Ranger, as can be expected from my comments is a great family dog that people immediately like as soon as they meet him. He has performed in youth hunts since he was 2 giving young people a first class vision of what our sport is all about."

VC Grouse Points Midnight Ranger NA-III, UT-I, has gone on to earn his NAVHDA Versatile Champion title at the 2015 NAVHDA Invitational. He is a sixth generation Versatile Champion. Tim's contact info is 612-850-2925.